BY LEAH LINSCHEID, FOX47,  SATURDAY, AUGUST 26TH 2017
JANESVILLE, Wis. — Many people were at parks enjoying the beautiful weather Friday afternoon, but officials want more people to get active in Rock County.
Data from the Rock County Health Department shows the county ranks second worst in the state for adult obesity, with 37 percent of adults having a body mass index, or BMI, of 30 or more. Rock County is second only to Menominee County, where 43 percent of adults are obese. We know that obesity is a result of poor diets and physical inactivity,” said David Pluymers, assistant director of the Rock County Public Health Department. He said the department uses the data from the County Health Rankings & Roadmaps website to see what the county needs to focus on. “We really need people to get up and walk, walk to places and bike to places,” he said. “If we could make communities more walkable and bikeable, that would help.”The Health Department helped the Rock Trail Coalition apply for a grant to make a map of all the trails in the county. The new trail map was just released and is available at visitor centers, trailheads and tourism bureaus. There’s also an online version.“The research has indicated that when people are aware of physical activity options, they’ll often take advantage of them,” Pluymers said.Betsy Courtney was out walking a trail through Palmer Park Friday afternoon as part of the 8 to 10 miles she tries to walk every day. She was surprised to hear Rock County ranks so high for adult obesity, especially since Janesville is known as Wisconsin’s Park Place.

“There’s so many trails, and there’s parks,” she said. “But kids nowadays, they like the TV, the video games.”

Pluymers said Rock County also has a problem that many counties experience: people are addicted to their screens.

“I was actually part of a focus group in a nearby community who described just that problem that they have sidewalks, they have parks, and it might be a beautiful day in the summer and there will be few to no people in the parks,” he said.

In addition to creating the trail map to let people know where they can be active, Pluymers said the Health Department is working with local communities to make the county more walkable and bikeable.

“We’re looking at the built environment: what can we do to have more sidewalks, more bike paths, more trails, more bike routes so that people can use their bodies to get around town rather than jump in a car or jump in a bus,” he said.

The Health Department is also encouraging breastfeeding, which Pluymers said can reduce obesity in mothers and children.

“We’re actively promoting the normalization of breastfeeding,” he said. “So to make breastfeeding a standard practice and more socially acceptable in the communities has been a big push on our part, as well.”

Pluymers said the data is only for adult obesity. He said it’s very hard to get data for child obesity.

Rock County ranks far above its neighboring counties for adult obesity. In comparison, Dane County has the lowest obesity rate in the state with only 24 percent of adults having a BMI of 30 or more. Walworth County comes in right after Dane with 25 percent, and 31 percent of adults are obese in Green County. The overall rate in Wisconsin is 30 percent. 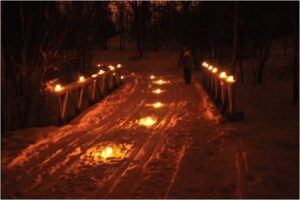 Night before Super Bowl Sunday! Open to hikers of all ages.  About a miles’ worth of illuminated trails. Bring your friends and family for this great fundraiser! Events feature bonfires,… read more →
View Calendar
Add
Website Design and Hosting by Firepoint Media
Back to Top
Enter your Infotext or Widgets here...